Welcome to OUR BLOG

Delicious cuisine to enjoy in Cancun and Nearby places

One of the best parts of traveling to Mexico is the Food, eating Real Mexican Tacos is something every tourist desires and cherishes, but that's not the only food available.

Mexico has different foods per states, with a traditional dish(es), one of the states with a vast gastronomic delight is the state of Yucatan, and it has a big influence on the culinary display that is showcased in Cancun and the Mayan Riviera.

Great chefs around the world have come to do a masters here in the Yucatan Peninsula, because of its great variety of ingredients, some of the popular ones are seeds, habanero pepper, red onions, sour oranges, corn, and black beans.

Let me mention the Dishes you must try ( not all, at the same time ) and beware of the sauces, some are very spicy- made from habanero peppers as it's their main ingredient. Even simple slices of onions are marinated in peppers and sour orange.

Vaporcitos a small tamale, with pork and chicken meat combined, wrapped in banana leaves and heated in a steam pressure cooker.

Kibis this is a snack that can be purchased in the beach, it's a little odd to see them, as they are wheat and ground beef, chopped onions, habanero peppers, and orange slices, all mixed and steam cooked.

Lomitos this is a pork dish that first is cut into big pieces and fried, then it simmers in chicken broth until all disappears, and it's served in a tomato sauce and half a boiled egg.

Codzitos Also called Air Tacos, this is a regional snack, its fried rolled up tortillas, with a tomato sauce and white cheese. 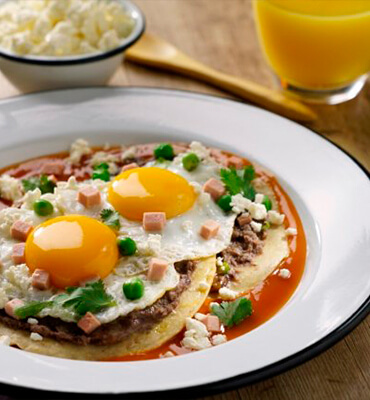 Huevos motuleños this is a typical breakfast and consist on sunny up eggs over fried tortillas with beans and ham, garnished with tomato sauce, cheese, and peas, as a side dish it's served with fried banana strips. Only two per plate.

Huevos con chaya this is a common small plant that grows all over the región but has a particular spicy flavor, that it's combined with other meals, can be used for breakfast in some scrambled eggs, you'll think this is weird until you taste it.

Salbutes another dish with a fried corn tortilla, this time with turkey meat and avocado (no black beans)

Papadzules a simple dish to do, you just need to do a rolled up egg taco and then pour some tomato sauce and some pumpkin seed sauce with epazote, you could also sprinkle some grated cheese on top.

Panuchos merely a delicious treat, to eat and to see how it's made, the corn tortillas are mixed with black fried beans, and then fried again, on top, there's shredded cheese, red onion slices, avocado, and tomato or habanero sauce. 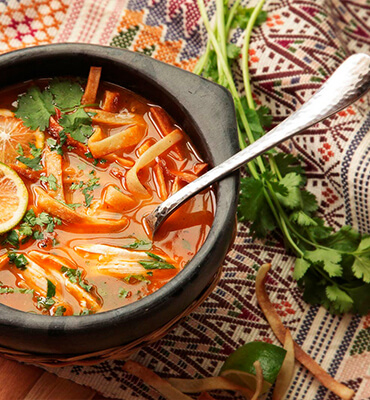 Cochinita Pibil this is the most popular dish all around, wherever part of Mexico you go, they have tried it at least once, the recipe is easy: pork meat marinated with achiote, sour orange and wrapped in banana leaves. The cooking part is done in an underground oven also covered with more banana leaves. You can eat it as a main dish, order Tacos, or tortas usually garnished with cooked red onions.

Sopa de Lima this is a chicken soup variation, as you add Limes into the mix, also sliced onions, tomatoes, and some cilantro, once everything boils the aroma will arouse you. Before serving, they give you a bowl with fried tortilla slices and pour the soup in it.

Queso Relleno this is a curious mixture of flavors and textures, the main ingredients are a holland ball of cheese, stuffed with ground meat and some dried olives, then a mix of tomato sauce and koi ( a corn bechamel sauce) all this is cooked on a conventional oven, until you see the meat tender.

Frijol con Puerco my all time favorite food, it's like a soup, you have to boil black beans with a whole piece of pork (included bone ) once it simmers, its served in a bowl, with chopped cilantro, red onion, peppers and radish, absolutely an explosion of flavor.

Poc Chuc pork is the main ingredient, as it's cut in thin layers and marinated with pepper and sour orange, before putting in the grill, once the meat is cooked is garnished with a tomato sauce, radishes, and avocado.

Relleno negro more than a dish it's a compliment for different types of meat, most commonly served with turkey, how to do it, well you burn different kinds of dried peppers, tortillas and achiote, once everything looks like coal, you need to blend it, and it will give you a saucy mixture you than cooked with the turkey, also served with sliced hard eggs. 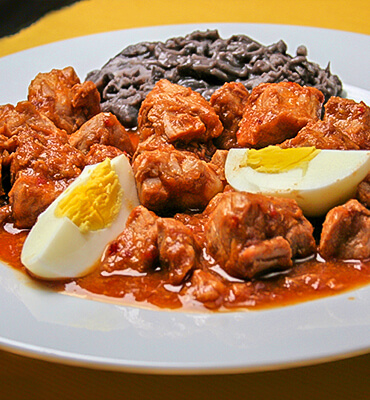 Mukbilpollo this is a traditional plate, but it's only made on November, as it celebrates the Day of the dead, it's a giant pork Tamale, also with Achiote and xpelon ( a black bean from the peninsula) also cooked in an underground oven.

Longaniza de Valladolid this is a pork sausage, and within its ingredients are peppers and sour orange, when put on the grill, it has a characteristic smell and taste that its unforgettable.

Pollo pibil for those who don't eat pork, the cochinita recipe, can be savor also in chicken, half of it is marinated in achiote, and sweet peppers onions and tomatoes, all wrapped in banana leaves and steam cooked, the tender meat will fall off the bone.

Torta de lechón con chicharrón As you can see the pork is part of the main courses, and the Lechon is the baby pork, cooked underground with several spices, a very juicy and tender meat, that can be eaten as Tacos or tortas ( buns), they also have the pork skins as a garnish a gives it a crunchy taste.

Brazo de Reina this is the perfect dis for the Vegans, as it has no meat in it, it's a big Tamale, that has boiled eggs, and Chaya in its ingredients, wrapped of course in banana leaves, and served in small pieces with a sauce of tomatoes and pumpkin seeds.

Escabeche de Pollo this is a very spicy recipe, so beware, its chicken, boiled with vinegar, red onions and ghost peppers, its served in a bowl garnished with sliced onions and green jalapeño peppers. 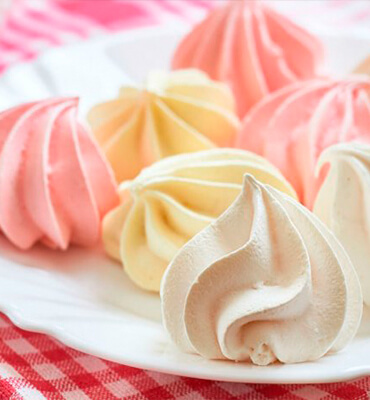 Dulce de papaya this is a dessert, that boils the papaya, with cinnamon, lemon, and a brown sugar loaf, the taste is absolutely sweet.

Marquesitas the easiest way to describe it is like this: it's a crepe filled with Holland cheese and rolled up, it can be complemented with chocolate or cajeta.

Merengues this is a dessert very common, but the Mexican edition, has egg whites, sugar and a touch of lemon, it's all battered, and oven baked, there's an old tradition in some towns, that the seller plays a game of coin toss with the buyer, if the buyer wins he gets 2 pieces, if the seller wins, he charges double for the treat, in the end, the loser always wins something.

Caballero pobre a typical dessert in the peninsula, as it is very cheap to make, has bread, eggs, milk, sugar, cinnamon, and vanilla, you mix the liquid ingredients, to make a syrup, and then you bathed the dough in it and garnished with prunes. 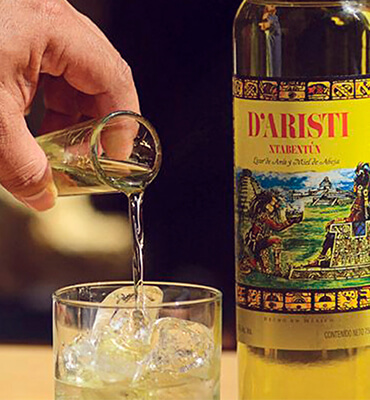 Agua de Chaya as I told you before this plant the Chaya has a spicy flavor, that be combined as a spice, as a meal, or even as a flavor to the everyday water, just like we do with lemons, and it's very usual to see it in the región, try it, you won't be disappointed.

Crystal negra this is a soda but has the peculiarity that is made in the Yucatan peninsula, and only sold on the nearby states, The Negra is a combination of banana, vanilla, and lemon flavor.

Pozole (keyem) has the name of another meal in Mexico we know, but the Mayans boiled corn, with Honey and Cacao to make a mixture that can be diluted in water as a refreshing drink.

Xtabentun this is one of the legacies that the Mayans left us, a digestive anise liqueur made of the fermentation of the honey of the flower of the same name, , that can be mixed with honey, coffee or just drink it as a shot, it's a sweet one, and their original version, has in its ingredients a plant called Floripondio (a hallucinogen).

This concludes my Gastronomic lesson of the month. Are you hungry?, for sure I am, now I will be headed to Las Fuentes, to see which one, our talented chefs prepared today.

But in case you didn't find any or the one you want to try, you could take the public bus in route to Mercado 28, there are several restaurants there that specialize in preparing these meals.

Keep reading our blogs to find more tips and secrets about our Destination, so next time you come on vacations, you can enjoy it to the fullest.