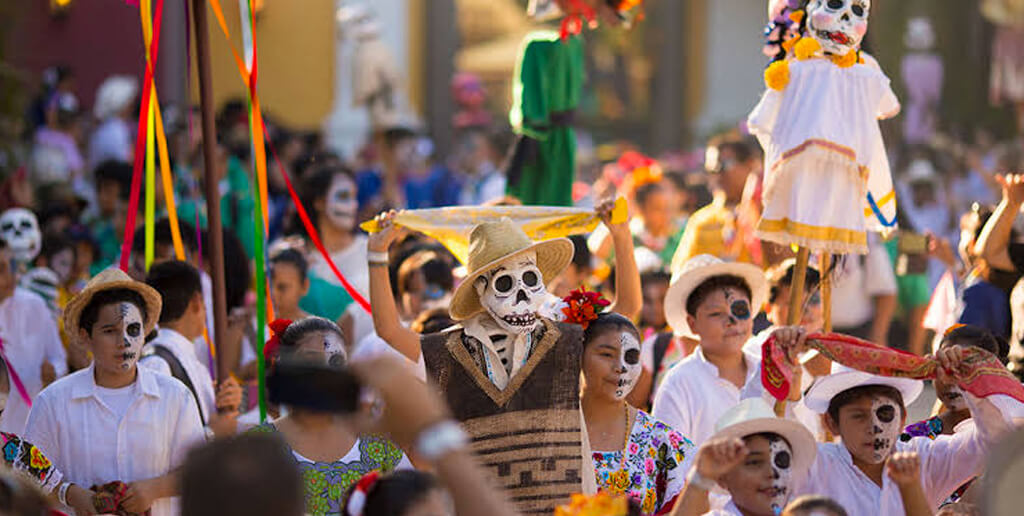 14th festival of life and Death in Cancun

Today I am going to tell you about the pleasant experience that lead me to attend the 14th Festival of Life and Death Traditions, which that takes place every year at Xcaret Park, with a different guest state every year, this time we had the joy that San Luis Potosí, delighted us, with its gastronomy and its craftsmanship.

This Festival takes place on October 30 and 31, as well as on November 1 and 2, which are the 4 main days on which the Day of the Dead is celebrated here in Mexico, unlike what is thought , this day is actually a celebration full of Color, Music and food, because for us Mexicans the best way to honor someone is to make them happy with what they liked most. 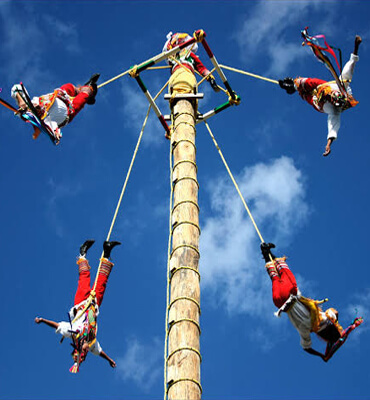 I had the opportunity to attend this Festival November 1st, there are multiple options to get to the park from the hotel, such as public transportation ADO, Taxis, or private tours with the Sol-HA agency, I took the ADO, which It had a cost of $ 12 USD RT, the opening of the festival was held daily at 3 pm, and ended at 11 pm to give way to the Concert of Los Angeles Azules band (which had an additional cost at the entrance to the Festival)

Tickets to the festival could be purchased through the official website, although I have to say, they have a certain number of visitors daily, and they sell out very quickly, since people from all over the world come to live this wonderful Mexican tradition, in turn, this year the organization went digital by launching an app, with the interactive program (itinerary), what does this mean? that one could customize it, and the application sent reminders of the events that you had marked as favorites, so you did not miss the time of each event, yes, you had to still carry a map of the place to be able to locate and go from one place to another.

I want to share the Experience with all of you, and what I LIVED and felt on this day, so that you still far share this emotion.

Let's start talking about food, since the state of San Luis delighted us with its traditional Enchiladas Potosinas, Asado de puerco , squash tacos with chorizo, and fresh waters made of Nanche, Lemon with chaya, Jamaican and even a Sour Atole. The prices were very accessible, since each dish did not exceed 3 USD and the glass of fresh water at $1 USD, very tasteful everything I tried by the way.

A traditional Mexican show from the state of Veracruz, but that is worth seeing on the occasion that presents itself, here a group of characters, make a small procession and ceremony with music emitted by the leader through his flute, while another plays the drum imposing the rhythm, One by one the 4 flyers climb a pole of more than 120 feet high, where at the top there is a wooden structure, to which they are tied with ropes, and they turn it, to be able to stay tied, once the process is finished, they turn upside down, and then the show begins, where they turn tied from the feet and the waist until the rope that was wrapped to the main mast is completely loose, and with them already on the ground safe and sound, an extreme activity, and not suitable for anyone.

During the day and night I was able to witness several processions, which are parades of people through the halls, honoring their deceased loved ones with rituals, one of the ones I liked the most was the one led by boy 6 girl scouts, since them with their peculiar joy, led the procession with songs and dances. 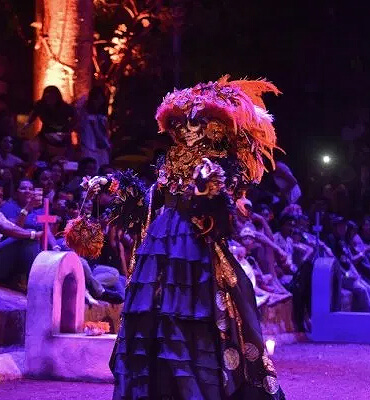 An impressive Visual Show lived since one of the peculiarities of the day (or night) is to dress and paint like Catrín or catrina, that emblematic figure of death, but that the Mexican touch has made cheerful instead of sad, with ornaments of flowers and hearts on the faces of those present, the park installed several modules with paint, where you could make up yourself, it was impressive to see young and old alike doing this, as well as many foreigners who joined the holiday.

But that was not all, since two shows with Catrinas were presented on stage, both directed by Erik Luna, the first in the Island Restaurant, where a majestic Catrina Carlota the Empress of Mexico, was looking for her beloved Maximilian, and during the course recited and sung poems of Love, the second, Catrina a faithful Bride, which still dressed as a newlywed, presents us with a mologo of friendship, love, and the life of all. You want to know more about Catrina and Maximiliano.

Something without a doubt, which fills us with emotion, are the altars of the dead, and the way in which people adorn them, since they have certain attributes that must be respected when doing so, within which, we find the orange flowers of Cempasuchitl, Ash, bread (food) wine (can be beer, water) sugar skulls, confetti, a photo of the loved one, what they liked best, Candles, crucifixes.

Various organizations in the region were given the task of assembling their altars and presenting them in an esplanade, with typical dresses, musicians and even catrinas, these were decorated, within which we can mention they were from the DIF, with 4 beautiful ladies dressed in typical costumes Veracruz, the boys scout and the Xplor fire ones caught my attention.

A very pleasant experience, since the cemetery of the park is mounted around a mountain, and the route to see all the tombstones takes about 40 min, since there are many graves, and you have to go up and down levels, each one is unique, for the messages engraved on them, and the detail in the design of the same, which makes them original, Burning candles and flowers adorn this route (do not confuse this with an altar of the dead, which, despite having some of the elements- is not the same)

Various plays were carried out during the day, which I had the joy of witnessing one called "Pals", the play is about a traveling circus, which one of its members died suddenly, and they honor his spirit, by doing their best circus act ever seen. 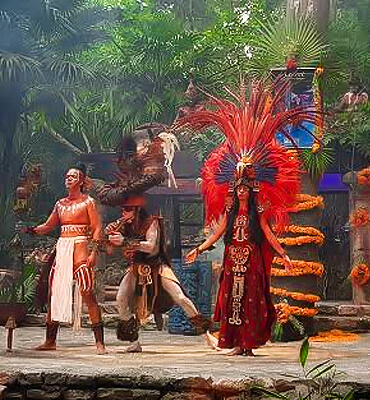 A whole building dedicated to children and various activities and crafts for their entertainment, there I could observe workshops of Painting, crafts, Singing, Composition of rhymes and even games like hide and seek. Something without a doubt that enjoyed very much.

I had the pleasure of witnessing 2 charangas, which at the end of the day is a musical party, the first in the main Esplanade, with a trio of beautiful ladies in traditional costumes and singing Huapangos Huastecos. Even a couple of ladies opened the dance floor and the zapateado.

The second time, I saw it a little far, since I was admiring the cemetery, and I was already on the third level, at the entrance of the cemetery, they started playing the trumpets and the drums, and quickly people joined in the dance , the cheers and shouts, , a show worth listening and seeing.

Also in the Mayan town, I found pleasant surprises, such as a Chocolate Making Workshop, where they take you step by step, the process of preparing the Cocoa seed; Manufacturing of Rebozos, and the weaving of them, with conventional techniques, weaving is an art that has been passed from generation to generation.

Another of the Mexican traditions per excellence, shows us a group of men dancing to the sound of drums and violins so that their prayers are heard towards their deceased, something characteristic of them are their colorful costumes. 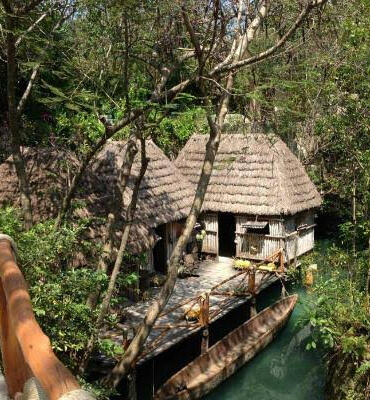 A small village in the middle of everything, is where we could see ancient Mayan rituals towards death, I even had the opportunity to see, a Cleanse (ritual to ward off evil spirits from the body) in one of the small cabins.

It is really impressive to see, as People from all over the world come to Celebrate 100% Mexican traditions, and as something that should be seen as bleak, because it is the death of a loved one becomes a celebration of praise, music and art, hopefully next year, if you visit us between October 25 and November 4, you can join us to live this experience without equal, as I said, in each state you live in a different way, but always with a peculiar joy, see you soon. 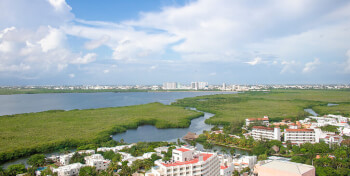 How else can we get to admire the whole city of Cancun at its finest? Well I have a few ways to do so, and I will share them with you 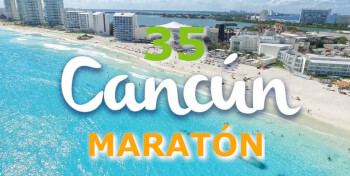 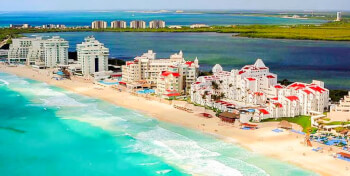 Explore Cancun and discover its wonders

One of the best things about traveling on Vacations is Exploring what is around you, and Discovering certain hiding activities 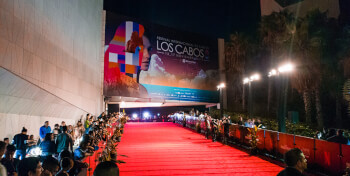 The International Film Festival in Cabo

Check out The Cabos Film Festival in Cabo on its 2019 edition!